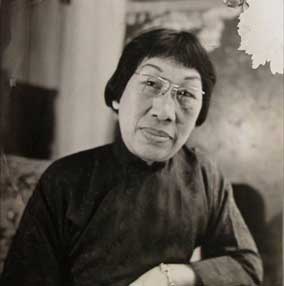 As one of the first female graduates of the Shanghai Art Academy, Pan overcame the obstacles faced by modern women by demonstrating an unwavering commitment to her chosen path which resulted in outstanding achievements.

Pan Yu Lin (Pan Yuliang), born on 14 June 1895 in Yangzhou, Jiangsu, has been hailed as one of the most influential artists and modern art educators of 20th century China. After the death of both parents, the young Pan was sent to relatives in Wuhu, Anhui where she later met and married Pan Zanhua, a customs supervisor in Wuhu. In the same year, 1913, the newlyweds moved to Shanghai where Pan Yu Lin started to study drawing with Hong Ye. In 1920, Pan was accepted to the Western Art Department at the Shanghai Art Academy and became a member of the first co-educational class there.

Having gained acceptance to the Sino-Franco College in Lyon which held its first recruitment in China in 1921, she quit the Shanghai Art Academy to travel to France. During her years abroad, she also attended the Ecole des beaux-arts in Lyon, the Ecole des beaux-arts in Paris, the Accademia del Belle Arti di Roma where she studied drawing and sculpting. Due to her outstanding achievements, Pan received a scholarship from the Italian Ministry of Education as well as having her works selected for exhibitions in Italy, making her the first Chinese artist to receive such honors.

At the beginning of 1928, Pan Yu Lin returned to China and was appointed Dean of Western Art at the Shanghai Art Academy. Over the next decade, Pan held numerous exhibitions in China and Japan and served as lecturer at the Art Department of the Education Academy of Central University. Together with Xu Beihong, Pan taught and fostered several outstanding artists. In 1934, the Shanghai Chung Hwa Book Company published The Oil Paintings of Pan Yuliang.

Pan Yu Lin returned to France in 1937, never to return to China again. During her 40 years abroad, her works were frequently exhibited in France, as well as in America, England and other countries and she received many notable awards. Throughout her artistic career during which she mastered all the important medium of Western art, she adhered to the adage of “Finding oneself through our forefathers, yet not forgetting oneself in the past.” She persisted in “fusing East and West to become one” (Chen Duxiu) in her artistic pursuits, enabling her to become a complete artist and a legend of her times.